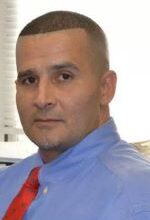 Louie Diaz is a person in long-term recovery. He works as a reentry and outreach specialist at the Middlesex County Sheriff’s Department.  His job takes him inside prisons and jails preparing men for release. He is a support system for returning citizens when they are released to the community.

Louie is an invaluable link between the inside and outside. Because of his background as a formerly incarcerated citizen, he is able to offer unconditional support and an experiential understanding of the culture of the streets. He understands recovery and the stresses of incarceration and reentry on both a personal and a professional level. Louie has a unique style of incorporating recovery, spirituality and love into his work.

He has been in the field of human services for close to 20 years, and has lectured and shared his life story at numerous schools including Salem State University, UMass Boston and Lowell, Boston University, Brown University ATTC, and many community colleges.

Louie has served as Assistant Director for the Center for Addictive Behavior in Tewksbury, MA; worked as a mental health counselor for the Holy Family Hospital in Methuen, MA; been both a counselor and Assistant Clinical Director for Adcare Criminal Justice Services; and headed up Lowell, Massachusetts’ nationally renowned United Teen Equity Center’s Street Outreach and Gang Peacemaking Division. Louie partnered up with the Lowell Massachusetts Police and Fire department via an addiction program called Lowell House Inc to combat opioid addiction in the city of Lowell Ma. Louie has been featured in numerous newspapers, has received many community awards, and been interviewed on local community radio and television.

Louie’s work is featured in the recently released documentary film, Beyond the Wall, that has taken him across the country to places like North Dakota, Alaska, California, Louisiana, Arizona, Washington, Illinois, Maryland and all across the commonwealth of Massachusetts. This film focuses on Louie Diaz’s efforts to reach individuals before and after they are released from prison; he works one-on-one attempting to help each man maintain his freedom by staying sober and being productive members of society. Louie becomes their mentor…