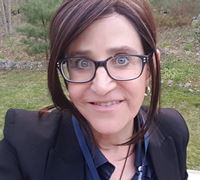 Gia Drew is an LGBTQ Advocate, Speaker, Educator, and Writer. Originally from Boston, Gia has called Maine home for the past sixteen years. Currently she works as Program Director at EqualityMaine advocating on behalf the LGBTQ (Lesbian, Gay, Bisexual, Trans, and Queer/Questioning) community across the state. At EqualityMaine, she oversees multiple programs, including educational and professional development opportunities for schools, businesses, and organizations, raising awareness about the LGBTQ community and providing information about public policy and law. She also serves on several work groups, including Maine Coalition Against Sexual Assaults LGBTQ+ advisory board, the Supporting LGBTQ Youth Coalition, and the Coalition to End Transgender Healthcare Discrimination. Before becoming an LGBTQ advocate, she was a high school teacher and coach for twenty years and in that time became one of Maine’s First OUT transgender public school teachers and one of the first transgender coaches in the country.