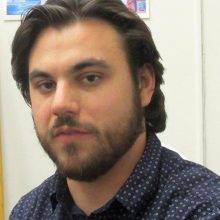 Oliver Bradeen, LCPC-c, MHRT-CSP Oliver is a crisis worker and counselor that has worked in the crisis field since 2013. Oliver is a native of Mid-coast Maine and now resides in Falmouth, ME. Oliver has a master’s degree in clinical mental health counseling from the University of Southern Maine and an undergraduate degree in psychology from Northeastern University in Boston. He has spent all of his professional career as a clinician working as a crisis co-responder with the Portland Police Department (PPD). Oliver spent his first few years with the PPD as one of their behavioral health workers funded by The Opportunity Alliance. In January of 2016, in response to the opioid crisis, Chief Sauschuck created a new position and program at the PPD: the Law Enforcement Addiction Advocacy Program (LEAAP). Since February 2016, Oliver has been the Substance Use Disorder Liaison and director of the LEAAP program. LEAAP is a pre-arrest diversion program that steers people towards safety and treatment. Intervention takes place before, during and after overdoses occur. Oliver is passionate about wellness, autonomy and safety. In addition to working for PPD, Oliver is also a relief clinical coordinator for a crisis stabilization unit in South Portland. He believes in integrated care for both mental health and substance use disorders within the medical system as well as community based support. He is part of the Greater Portland Addiction Collaborative and the Thrive2027 project by The United Way.